A fighting retreat is the most dangerous and difficult military play

I heard Harry Gordon in Conversation with Richard Fidler, and he's talking about the war in Korea.

The words "fighting retreat" came up and it reminds me of the many stories I've heard of military tactics. The most difficult and dangerous manoevre is to relinquish ground without being completely destroyed.

The old story - it's hard to face an enemy when you're running away from them.

Another story. In Kokoda where a bunch of young volunteer kids were stuck at the top of a hellish track against the strongest tropical army in the world - outnumbered and 96km from their base of supply. The Japanese rolled over them and under kindly old soldier Sam Templeton (who died in the campaign) they had to teach themselves how to fight a retreat.

The Maroubra force fought that retreat right back 80km - Isurava, Eora Creek, Efogi until the Japanese could see the lights of Port Moresby from Ioribaiwa. I've been there twice - the pain and discomfort of the place is beyond description, and I was on the tourist circuit!

A fighting retreat requires brains, courage and teamwork. It requires the front guys to hold their position and punch above their weight while their buddies clear out. Then the guys who dropped back need to stop, turn around and place themselves in danger rather than keep running all the way back to safety. 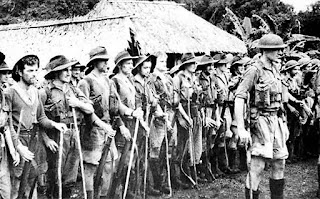 (The 39th Battalion AMF on Parade)
To successfully relinquish ground requires courage and teamwork. And you can only achieve it if you are shoulder to shoulder with people of the highest moral fibre and spirit.

Oh, and of course the Kokoda story ended with the Australians fighting all the way back up the track and forcing the Japanese out of New Guinea.
Posted by Cullen Habel at 11:51 AM