Golf cancellations and many regrets 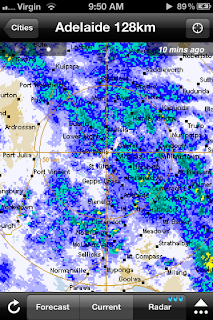 Its raining. A good thing for some people (subsoil moisture for future grain crop) and a bad thing for others (wine region mildew).

My dear friend texted to cancel today. Why wouldn't you? We're doing this for fun. Contrast it to the brilliant weather we had last week and why would we slosh around in the hills, braving discomfort?

Perhaps I've mellowed, because a younger me would not cancel a golf game due to rain. Another case of today's moments of truth offering the chance for tomorrow's regrets.

I wonder what tomorrow's regrets will be or (for that matter) what today's moments of truth are. 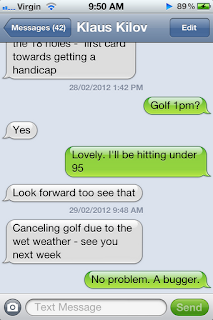 So my two stories of regret, one when I did play, and one when I didn't. On a study tour of NZ in about 1989 a sweet girl who worked in geriatric care offered to host me on a golf game. I'm not sure she even liked golf but as the forecast came in, I was undeterred. I dragged that poor girl through five hours of serious New Zealand rain at Palmerston North. And she didn't squeak a word of complaint.

Then in about 1993 I was due to play with my squash team on the morning before our regular squash match that night. I think - now - how I had more energy than brains then. I was really prepared to come of the golf course and that night play a comp game of squash. Anyhoo, when my buddy David canceled that morning I was surprised, but that wasn't the worst of it. That night at squash I threw a huge tantrum. My team would have been bewildered at my lack of commonsense, or my obsessiveness. I've often said that being a friend to me is not as much fun as it looks.

So this time around it is a great deal simpler. There'll be another week. There's plenty I can do today - in fact I can rack up some chargeable hours and move a couple of projects along.

But these days I wonder what today's moments of truth are. Experience tells me they're never the things everyone else tells you are important.

UPDATE: I get to make that chicken curry tonight too and use some of those tomatoes from our garden. I couldnt have done that if I got home 6pm from golf and wouldn't have the simmer time.
Posted by Cullen Habel at 10:25 AM