From the searing mind of Bob Dylan in 1962, this version from Bryan Ferry in 1973 just fires me up, every time I hear it.

The song starts all chilled out, Roxy Music style, and with each verse the accompaniment gets stronger and stronger. The wandering lead guitar and powerful strings simply raise the adrenaline level until an engaged listener feels like they want to swing an axe and tear something down, the vocal support makes it an anthem of solidarity and you never want the song to end.

More than "the times they are a changin'" this is more like "the shit's comin down, be ready". It has a bunch of associations for me:

Primary school
I was ten years old in 1977. I didn't get to appreciate Roxy Music but Bryan Ferry was going well with "let's stick together". 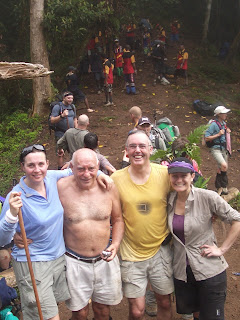 At some time during the walk the rain was so hard that I was walking up shin deep rivers on a particular part of the track. My near delirium singing of the song caused my companions to good naturedly grow tired of me. for a moment.

Grandmother dying
Upon my return from the walk (2007), my grandmother took to her death bed. Whilst the elation of the trip (and the "hard rain" song) was still in my mind and I showed Nana the photos, I was getting the feeling that some pretty big shit was about to come down. Which was - of course - the point of the song. And the shit did come down. Nana died and a great many things have never really been the same.

My Cassandra Complex
But more to the point, this song is a harsh, insightful harbinger of the reckoning. Dylan in 1962 made his last verse include:

And it resonates with me. My challenge has always to stay silent when to stay silent is the greatest survival option. Thus the Cassandra Complex - "Cassandra was left with the knowledge of future events, but could neither alter these events nor convince others of the validity of her predictions"

Just quietly I think some of my predictions are soon to be realised, some people I know are feeling far less than comfortable. A hard rain's a gonna fall, while it looks as though I might be able to jump clear of the train wreck

Oh, what did you see, my blue eyed son ?
And what did you see, my darling young one ?
I saw a newborn baby with wild wolves all around it
I saw a highway of diamonds with nobody on it
I saw a black branch with blood that kept drippin'
I saw a room full of men with their hammers a-bleedin'
I saw a white ladder all covered with water
I saw ten thousand takers whose tongues were all broken
I saw guns and sharp swords in the hands of young children
And it's a hard, it's a hard, it's a hard, and it's a hard
It's a hard rain's a-gonna fall.

And what'll you do now, my blue-eyed son ?
And what'll you do now my darling young one ?
I'm a-goin' back out 'fore the rain starts a-fallin'
I'll walk to the deepths of the deepest black forest
Where the people are a many and their hands are all empty
Where the pellets of poison are flooding their waters
Where the home in the valley meets the damp dirty prison
Where the executioner's face is always well hidden
Where hunger is ugly, where souls are forgotten
Where black is the color, where none is the number
And I'll tell and think it and speak it and breathe it
And reflect it from the mountain so all souls can see it
Then I'll stand on the ocean until I start sinkin'
But I'll know my songs well before I start singin'
And it's a hard, it's a hard, it's a hard, and it's a hard
It's a hard rain's a-gonna fall.


And a cool live version too:


Even with the dated 1977 looks, the guy just oozes cool.

- Posted using BlogPress from my iPad
Posted by Cullen Habel at 5:52 PM