Oh, my mistake. I haven't seen overt sexist comments like that (about women) since the late 1980s.

But I'm still hearing the comments - a "man's look" for something, coming down with a case of "man flu". We seem to be halfway there. And these frypans being sold in McLaren Vale warning to stand back when a man is cooking. 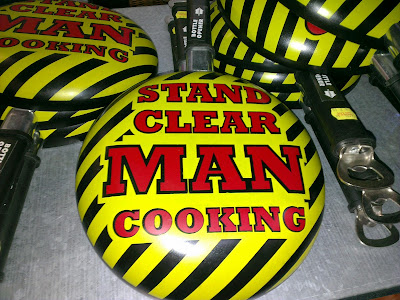 I suppose one might revert to the old faithful excuse used by the last of those who would speak about abos and wogs: "it's just jokes".

Or we might talk about the one person who is particularly bad and use that as an argument why all - say - men are the same way.

I'm not particularly offended, but weak logic disappoints me a little. No biggie.

Now it's just time to finish with my other disappointing one: "so now you're getting a taste of it" or "men had it their way for long enough, this is just payback". Yeh whatevs.
Posted by Cullen Habel at 3:22 PM