Cullenofadelaid classic: The Wolf and the Lamb: Some fights just won't be won


"Cullenofadelaid classics" is a set of blogs from the vault. I have a bunch of posts I made about five years ago but pulled them down - my political environment had got a little heated. But there's some handy content there so here it is. This is from December 2015.

The Wolf and the Lamb at www.litscape.com by Aesop 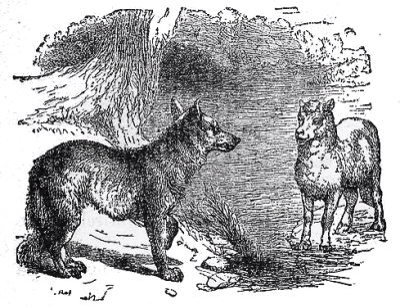 A WOLF, meeting with a lamb astray from the fold, resolved not to lay violent hands on him, but to find some plea, which should justify to the lamb himself, his right to eat him. He then addressed him: Sirrah, last year you grossly insulted me. Indeed, bleated the lamb in a mournful tone of voice: I was not then born. Then said the wolf: You feed in my pasture. No, good sir, replied the lamb: I have not yet tasted grass. Again said the wolf: You drink of my well. No, exclaimed the lamb: I never yet drank water, for as yet my mother's milk is both food and drink to me. Upon which the wolf seized him and ate him up, saying: Well! I won't remain supper-less, even though you refute every one of my imputations.

Moral: The tyrant will always find a pretext for his tyranny, and it is useless for the innocent to try by reasoning to get justice, when the oppressor intends to be unjust.

Posted from Blogium for iPhone
Posted by Cullen Habel at 7:34 AM