Empowering myself: Life's too short to stay in a bad situation

About six weeks ago I was (unwittingly) running a field experiment about some new people I was working with. We had walked - shoulder to shoulder - into the fray and things had gotten ugly.

I knew the finger pointing would start and that this was to be a test of the quality of the people I was working with. I was disappointed that my new friends were so quick to throw me under the bus, but I could live with it. 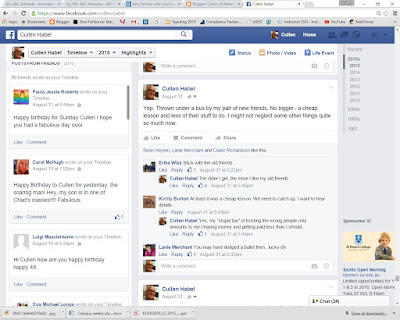 However in what seems to be some bizarre form of dissonance reduction strategy, my new ex-friends are trying to back fit the story that I was the cause of the problem. That's a little yucky.

I've spoken before about how dangerous it can be to wade into a mess and try to clear it up - lest you be blamed for creating the mess.

Life is too short. In a conversation I'll never have, my words would be:

"There are four things that keep me at something. One is when I'm paid extremely well, another is when I get to do work that I totally, totally love. Another thing that keeps me in a place is when I'm treated with respect and yet another is where I get to work with fantastic people. The situation here fails on all four counts, so I guess it's goodbye."

I won't have that conversation because I'm not quite dumb enough to burn my bridges that hard, but if I slowly drift into the whole "Where's Cullen? We used to see him a lot more in the past" you'll know what's going on. I'm just accepting better offers.
Posted by Cullen Habel at 7:25 AM