Cardinal Pell: Let's not be a blister

The other night George Pell made some disappointing comments at the commission. I had written this the day before and it still applies. But his detachment is disappointing. Still - to my point:

Cardinal George Pell is making testimony via cable link from Rome. Embroiled in the sad and sick history child abuse within the Catholic Church and the cover-ups, Pell is facing a royal commission. 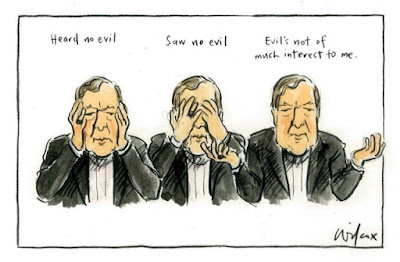 What I find particularly unedifying however is the roar of outrage from the masses. Whatever I believe, adding my voice to the chorus is just a little too late.

It reminds me of the person who turns up to the working bee at 4 p.m. or as my friends joke  - "that guy is a blister - he appears after the work is done".

Why not be the change you wish to see right now? There is plenty of unfairness to call out today rather than retread a tired old meme about (very) bad stuff that went on in the 1970s. I desperately hope that the people from back then who remain scarred today find Justice and Peace. And that's what the system is working towards.

But I humbly suggest that our voices are better spent encouraging the young girl who feels like she will never be anything more than a shop assistant (or another who's convinced she's already a whore), or the kid who doesn't get to eat although there is plenty of beer in the fridge. Or (dare I say) finding some response to communities within our own country that continue with a culture of child abuse - if we have the stomach for it.

I wish I'd had the guts to speak up as a kid in the 1970s when I heard "abo jokes" or stories about "poofter bashing". I wear it as a badge of shame, quietly. Perhaps if I had a lightning rod such as George Pell to assuage my own sense of guilt I'd be screaming too.

My wife has always impressed me. She has never stayed quiet when she has seen injustice done. My mother, too - to her own destruction. Right then, right at that moment. Can we all say the same for ourselves? Why not act now? In the lunchrooms, in the front bars, at the cricket. Your real opportunity is now.