I don't like most of Southpark. But years ago I saw this and found it amusing:

and this oversimplification is offensive to many people doing it tough - but from a restricted personal point of view (thinking of myself only) I have to pay attention to this: 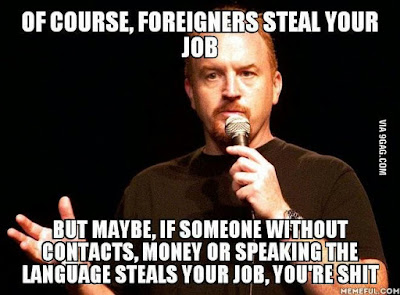 I've been put out of certain jobs by:


And in every case I've found a way to survive.

For sure, any time now I might be competing with people for taxi driver jobs, or working in a bar or collecting shopping trolleys and will rebuild from there. Or I might cling to the jobs I have, because I provide value for my stakeholders at a price that makes better economic sense than the alternatives.


They're all just tools that help me compete for work. Tools I spent money and energy accumulating. They're not a guarantee that someone will keep paying me.

Because we're all only as good as our last day.

And as I read the article that gave me the links above - I take on board the criticism of "what the hell would you know?". Referring (more or less) to me, the author states:


"They are in a specialised field. Both are in advertising. Nobody can just waltz in from Syria and offer their unskilled, non-English speaking illiterate expertise in our couple’s chosen field. Nor can it be done in a call centre abroad.
Nobody they know feels threatened by migrants or outsourcing in the job market either, just like they always remark with a degree of childlike wonder that nobody they know voted for Tony Abbott, so they have absolutely no idea how he ever got in."

They have about as much comprehension of the life experience, fears, and hardships of the average One Nation voter in the Western Suburbs as they do about an African American, or a Syrian refugee for that matter, so dictating what these people should and shouldn’t be concerned about employment-wise from the comfort of a gentrified Inner West suburb is nothing less than textbook white privilege.

Point taken.
Posted by Cullen Habel at 10:00 AM