Of all things - probably the one thing that really grinds my gears is when people take themselves too seriously. It's not that they don't have a point but when a person becomes so precious about their beliefs and the "right" way of being I just feel this urge to scream.

These "agents provocateurs" have been in the guise of Russell Brand, Tim Minchin, and a bunch of other names that quite often appear on our ABC. And there is Milo Yiannopoulos.

Someone recently impressed the hell out of me some time ago when I asked him do you like "Milo Yiannopoulos?" He said "I'm not sure I like him but I like that exists". That made me feel very proud.

I wrote recently how we must let "the idiots" have their say, and then we say how we feel about what they say. It worked with One Nation last weekend as they got slammed in the Queensland election, and same sex marriage is all in the process now - after everyone had their say. The sensible centre are on board - we must trust them.

I don't consider Milo to be an idiot but as a country we desperately need him to have his say. I will be going to see what Milo Yiannopoulos has to say tonight. Wherever he does that. I like Tory Shepherd's column: "A dinosaur with good hair and bad logic" but no calls for him to be shut down. Go Tory; go Australia! 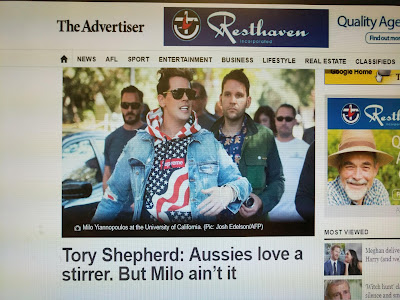 My great concern is that I will end up on the television with a bunch of Antifa people tearing at me, physically attacking me, or simply shouting in my face. And I'll be branded a right winger. Because not everybody feels the same way about freedom of speech. If I appear on the news, then this is my story.
Posted by Cullen Habel at 7:38 PM