A clever, cool statistician in your pocket 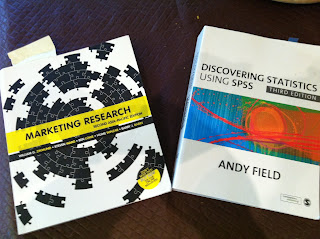 Here are a couple of books I'm using at the moment. The marketing research one is nice, very practical and written by a couple of friends in NSW. But when I get stuck on numbers I can't help but reach for Andy Field. Used extensively by the psych students, Andy is practical but answers all those deeper questions that normally we squeal for a statistician over. And he's funny.


Posted from Blogium for iPhone
Posted by Cullen Habel at 8:33 AM No comments:

Close to the customer - a good place to be

I might be wrong, but in the rough and tumble of business life I feel there are a few good places to be. One of them is as the truly dispassionate, prudent manager of the accounts. I've seen this when customers of mine have appointed an administrator - the stickler for process with obviously no self interest is a very good place to be.

Another important place to be is close to the customer. The customer is the source of cash flow inwards. Nobody needs to turn up to work if we're not selling anything.

So when I work in education I like to be close to the students, in market research the clients, and many other times the public. I understand the idea of "internal customers" and it might have some merit if it's not your job to be directly in contact with the customer. But then I've always gravitated to the jobs that DO keep me close to the customer.

On a different but related point. A long time ago somebody in the University sector had noted how important the external activities really were, and they also bring the greatest return for the employer too. I suppose at a stretch that could include students.
Posted by Cullen Habel at 5:52 PM No comments:

Six new clients through this blog and some twitter

We have six clients this year for our 120 students running their market research projects. And it' working well. I'd like to not trumpet them too loudly at the moment (there'll be a lot of work going on soon) but they're great partners and it working well. I have one who's happy to be pretty public at the moment and whose research won't be compromised:

Students are in their Week 3 client meetings this week, and will prepare their research proposal soon. From there it won't be too long and they'll be collecting data.

And what's been good is that most of thee contacts have been made and built through this blog and twitter. It's great to to good work with good businesses and when all the research is in, I'll be thanking them very publicly.

But for now you know who you are, and thanks..

Cullen
Posted by Cullen Habel at 10:21 PM No comments:

A very scary picture with a happy ending..

I respect they guys who manage to make skydiving their living. It's a tricky business to run - I think - and then there are the things that might go wrong.

Congratulations to Curtis Morton, whose pilot chute got out as he was on the strut of a Cessna 206 a couple of days ago. Close to the most dangerous thing one can have happening in a plane. Curtis got off and everything went under the tail. Godspeed.

At last, a new and substantive reason to talk about the old spice ad.

Of course we love it. It's a great piece of advertising. Can you get hold of the product? Not so easy.

Apparently one can only buy the Old Spice deodorant stick in Australia - not the body washes and sprays. (Really? I'm sure I saw something big in a store with Old Spice branding. But that just shows how bad a consumer's - or my - memory might be for details) Coles appear interested but Proctor and Gamble are not planning to introduce the product. Fair enough - they need to make a business decision - but I can't help but think it's a bad decision.

Forget the 4p's - Prof Byron Sharp in the University of SA's Ehrenberg - Bass Institute has for years been talking about physical and mental availability as the two key ingredients for marketing success, and I think I agree. And P&G have both, if they want it. How much effort does it take to get Coles to want to list your product? And Coles say they want "Old Spice" products. How much energy does it take for people to even think of your brand (a term known as salience) when it's time to buy? And P&G have that - at the moment.

Fair enough - it may be a flash in the pan. The "Old Spice" hype may be over while the stock is still on the water, or the production hits full speed. But think of another brand that waited for decades with high salience and limitations on the product to buy: 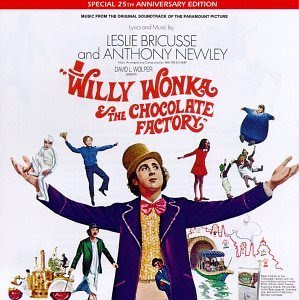 I only started to notice the brand in the late 90's, and believe me I paid a LOT of attention to what was in the Candy Category as a 10+ year old in the late 70s. The website says the brand was launched at the time of the movie, but I would argue not supported. But it's all worked OK for Nestle now, I suppose.

Languishing unsupported throughout the early 0's, a management buyout in 2008 and a relaunch in 2009 with a highly successful facebook competition harness a whole heap of the latent loyalty - or at least salience - that this brand had built with its very good avertising throughout the 90s.


So that's it. I wouldn't be surprised if the Old Spice range comes to town one day, once the stark reality appears. What a shame - I was going to buy it too next time around. And for nostalgia, hit me with a Samboy chip:
1985

Posted by Cullen Habel at 11:58 PM No comments:

We're thinking of checking out how well advertising works in the domain of new media. We want it to be a straightforward study - measure ad effectiveness when delivered through a range of different media.

Now I know the premise is a little wrong; Facebook and Twitter are about engagement and relationship and braodcast (or print) media is about - well - broadcast, but bear with me.

Far from being a chance to say that "social media doesn't work" the angle is more like "don't use old ads in new media". And just because WE THINK it's all wrong doesn't mean it's been measured and established. Still, that's what my student's literature review is about.

So I have a lot of clever people that I connect with on Twitter, which is what drove most of the traffic here. Feel free to comment, or privately at cullen.habel@NOROTTENSPAMadelaide.edu.au because I'm really interested.
Posted by Cullen Habel at 11:50 PM No comments: