What a hilarious story. I went to Sim Lim Square just then, fully prepared to pay $120 for a product I can get online for $88, fully aware that the product is superseded. A retailer who had it decaying on his shelf wouldn't play. He might have been stuck on the "rich, dumb tourist" image.

Here's the story. A (good enough) little solid state video recorder called a Samsung UX-10 has been my teaching companion for 1.5 years. Today inclass, I clumsily broke it. Bugga.

My urge was to instantly replace it. It's old stock, superseded by the UX-20, which is still only about $125 on the web. It appears I can replace this thing for about $100 through Amazon. But I thought us give Sim Lim Square a chance. I didn't expect to see it there. 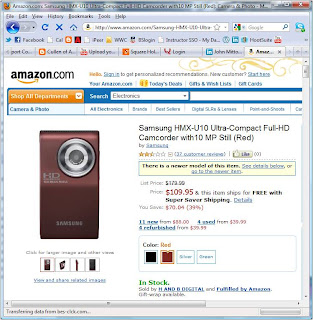 A little searching at Sim Lim Square, I reluctantly allowed myself into a conversation with one of the guys whose job it is to sell cameras.

I knew what I wanted. I asked for the Samsung UX-10 and was greeted by "we don't have it". No surprise, but I said I knew what I want, I broke one today and want a new one. One of the other sales guys grunted something to my guy and then all of a sudden my guy had one in his hand. My answer "yep that's it, good"

Last I heard was him shouting "one hundred dollars" behind me.

I'm not angry, just a little disappointed. I have other solutions, the iPhone will capture my lectures fine for the next two days. I just need to massage the iPhone memory a little. Then I may, or may not, buy a UX-10 or 20 online. But the Sim Lim sales guy will probably still have his sitting on the shelf, and missed his chance with me.

UPDATE: I used the iPad to take the lecture video yesterday and it was fine. Vid quality fit for purpose and sound quality great, and the files compress well. Example:

It saved me a bit of money. But it does bewilder me a little when people can't read my signs. If you force me to I will find another solution. No biggie.


- Posted using BlogPress from my iPhone
Posted by Cullen Habel at 10:36 AM