At a Blues Brothers show tonight. Eleven people putting together some entertainment.  How much fun is that? 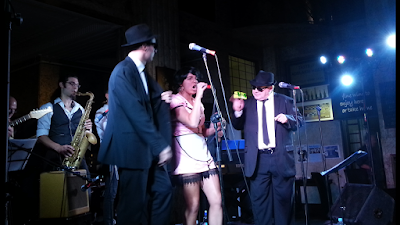 And like this. Jake and Elwood go to get one of their band, who's now running a grill with his wife. She reads him the riot act. But by the middle of the song, the music is so good that Jake and Elwood simply end up as part of the chorus line.

So Ray starts up some music to show them that the old keyboard still has some lid in it, and the whole street joins in. As fantasy movies go, they could be worse than this.