When I saw Mark Hassell (Chief Customer Officer Virgin Australia) in September, his story of the evolution of Virgin served as a case study in the "Total Product Concept". 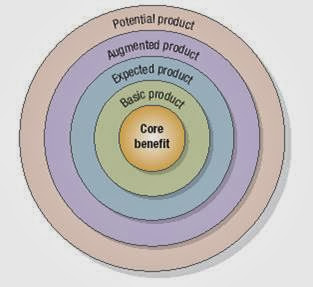 While it has been in the first few slides of any Intro to Marketing course I've taught it's nice to have a real life example. I've always spoken of airlines but for last month's MBA course I was able to let Mark tell the story.

Deregulation and a low cost entry point
When Richard Branston launched Virgin Blue in the early 90s a famous line was "we won't give you an airline meal you don't want, we'll just give you the very best price". Until 1990, full service carriers were the only option to fly. If we look at the "Levels of Product" diagram at the top, they kept adding new things - inflight meals, lounges, movies - and these were all at the "augmented" level. Before the 1990s this worked pretty well in a regulated market.

But as Mark said, the low cost carriers (eg Ryanair) in Europe set the scene for a cut price carrier. The mystiqu of air travel was waning and consumers began to think in terms of "getting from A to B". Enter Virgin (v1) with a product stripped down to the core benefit (time efficient transport) as an entry point.

Fair enough, there was a basic product in terms of seating/reservations and an expected product (safety) but all of those expensive product augmentations were left to the existing full fare carriers.

Sure, at the time Virgin wasn't the only attacker at the low price end - "Impulse" was a name that got around - but their message was clear and well made. Have a look at the video above at the 6.50 mark. The "cheeky low cost carrier" suited Sir Richard's personality well.

Next: When being drawn into product augmentation raises your costs. Time to do some hard thinking.
Posted by Cullen Habel at 11:26 AM