Yes I was looking at the weather and here was an ad for Dollar Shave Club. Google - just as creepy as Santa - "he sees you when you're sleeping, he knows when you're awake, he knows if you've been bad or good so be good for goodness sake" 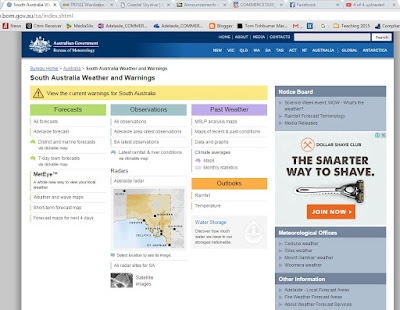 I'm not complaining. I get relevant advertising and great speech recognition.


Posted by Cullen Habel at 1:24 PM No comments:

I'm not making a statement. I just made a choice. 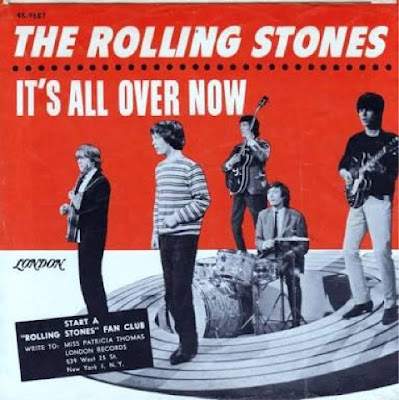 In response to the boring interview question "tell us your greatest strength and your greatest weakness" I have a new prepared answer:

My greatest strength and my greatest weakness are the same thing. I just simply do not have a poker face when it comes to me dealing with people.

I am painfully effusive when I hold someone in high regard so much so that I seem to be crawling. But also, if I don't respect what I see I find that hard to hide.

The greatest apparent insult seems to come when I have previously thought somebody was good but then recognise that they're not really that good.

I assure you if I go missing or start challenging you it's not personal - it's just that I can't hide what I'm thinking. I have found that the greatest existential pain I've ever felt is where I'm not being true to myself.

I have at least a half a dozen people right at the moment who are saying "Cullen went from nice guy to asshole in a split second."

Sorry about that. But the truth is I always was just an arsehole.
Posted by Cullen Habel at 7:58 AM No comments:

I managed to make some things work so that four of our Master of Wine Business students got to come on a trip with my friends the Academy of Wine Business Research #AWBR2016 on Winery tours of the Barossa.

Many thanks to old friend Justin Cohen of the Ehrenberg-Bass Institute for Marketing Science for your brilliant organisation, and the Uni of Adelaide people who allowed us to use their tour tickets. 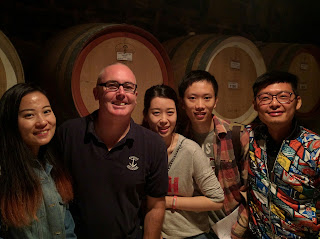 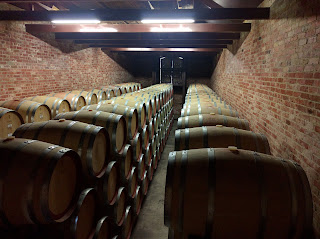 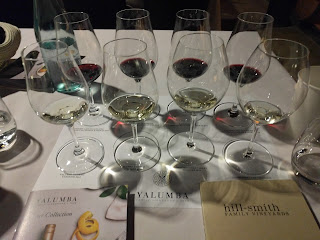 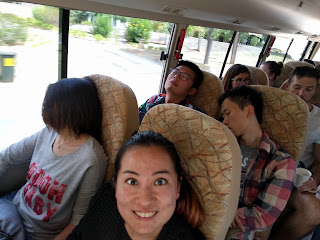 Posted by Cullen Habel at 8:19 AM No comments:

Hormone free beef: a non-advantage turned into a selling point 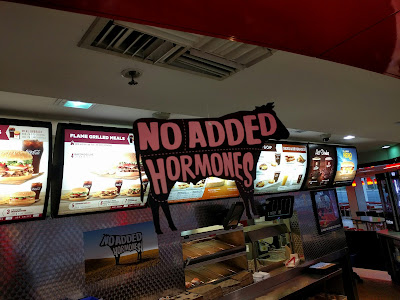 A popular quick service restaurant is housing the fact that they have no hormones added to the beef they use.

A great selling point with a range of health benefits and feel good animal rights ticks.
If one has a choice between hormone free or hormones added one would choose - I expect - hormone free.

Well played Hungry Jacks although the fact is there is no hormone growth promotant use allowed in Australia. All beef is (added) hormone free.

But that is the difference between perceptions and reality.

Posted by Cullen Habel at 8:10 AM No comments:

The "If" series: Stoop and Rebuild

The "If" series contains a set of excerpts from Rudyard Kipling's magnificent poem. It's a shame about the gender specific language although the poem was written over 100 years ago. These thoughts are my reflections only.

Or watch the things you gave your life to, broken,
And stoop and build ’em up with worn-out tools

There's a certain humility to this, as well as a stoicism. A few times I have spent a decade or so on trying to make something happen - and watched it trashed, over a period of a few weeks. Personal relationships, career directions, client relationships. Often I've been a part of the mechanism that destroys the achievements, sometimes I've had the help of malicious influences outside of my control.

But where there's life, there's hope. I recently sighted a prior nemesis across a room and the thought came to my mind:

It's only with a detached sense of sad satisfaction that I watch this person's own situation unravel. A dish best served cold, I suppose.

I seem to survive, from one disappointment to the next. And it seems that every dead end is an opportunity to reinvent myself. In every case I now thank those who destroyed my efforts when they did. I didn't feel it at the time but as my beautiful mother once told me:

I wonder what I'll be five years from now? And who will I be able to thank for destroying what I currently have?
Posted by Cullen Habel at 11:47 AM No comments:

Since I heard the term two months ago I've thought it was a bit dweeby.

But somebody's buying. Sometimes it really is that simple. Kiwifruit instead of Chinese Gooseberries, Calimari instead of Squid, Smashed Avocado instead of, well, Avocado.

Yes. The market truly is that superficial. 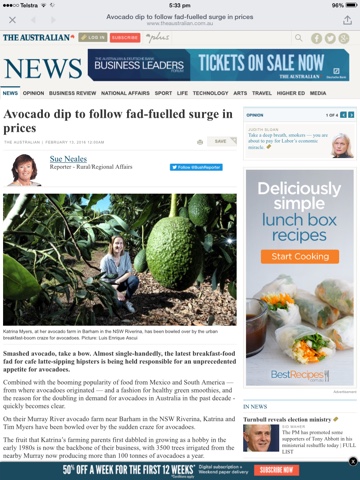 Posted by Cullen Habel at 5:39 PM No comments:

It's not a problem but when I buy an iced tea - weather it's 500 millilitres or 1.5 litres I am used to buying it with a big neck.
Recently Lipton have been selling their 1.5 litre ice tea with a small neck. Now that is just a minor thing but it's enough for me to start buying other people's iced tea.
Apparently the Real Iced Tea Co still put a big neck on all of their bottles. Simple stuff - who made that call? 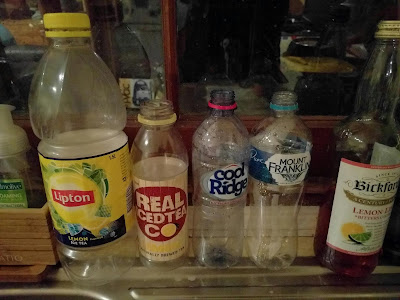 My razors come every month.
They always come with a card that says something.
This month was nice.
In the mass of confusion that is life, at least razors are simple for me. 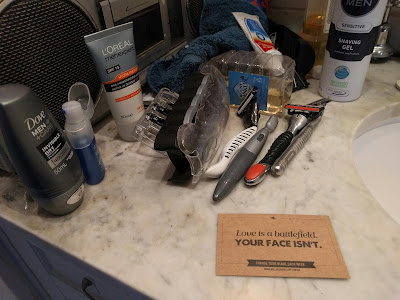 Posted by Cullen Habel at 6:22 PM No comments:

Service is part of why I paid twice the price

I have bought so many bikes in my life that I shudder to think how much money I've wasted. At least from my position as a non fanatic.

And many of those bikes I have bought as cheap Kmart bikes in a box that I need to assemble for myself.

It's fine - nice and shiny on the first day but I have another thing - I hate repairing bikes.

So for last Christmas instead of spending $100 I spent $200 and bought from a bike retailer. I presume that the bike would be better quality and I told them at the time that I was doing this so that I would not feel embarrassed about asking them to service the bike later on.

Imagine my surprise when a month later there was a minor mechanical issue - something I can fix myself - and I took the bike back to the retailer.

When I was met with "on no I don't think we'll have that part" I hit the roof.

"So here's the thing. The bike is 1 month old. I bought it from you rather than paying half the price at Kmart because I was counting on the after sales service"

The sales guy then begin to try a little harder to help but it was still a fairly unsatisfying experience. If I need someone to scratch themselves, look at it, and say "oh I think it should be too hard" I can do that myself and save 100 bucks.

Now I know how Grumpy Old Men get that way.

I got a call four hours later saying the bike is fixed and ready to go. Good news.

Posted by Cullen Habel at 2:28 PM No comments:

"Cullenofadelaid classics" is a set of blogs from the vault. I have a bunch of posts I made about five years ago but pulled them down - my political environment had got a little heated. But there's some handy content there so here it is. This is from February 2010.

Accidents don't just happen. Mistakes happen, we just call them accidents. It's not about blame but responsibility; if you've built a system where something can go wrong then when it does it's time to take responsibility.

Murphy was right.
Posted by Cullen Habel at 9:00 PM No comments:

So for a little jargon a TARP is industry talk for Target Audience Rating Point. I don't spend a lot of time thinking about it but let's just say that the more ad money you spend the greater the number of TARPs that you get.

The old fashioned way to get TARPs is simply to buy them. Find a media company who's running a TV show that people like, fronting a radio program or running a newspaper or magazine. Pay them some money to show your ad, and there are your target audience rating points. If you have good ad creative then perhaps people will remember your message, remember your brand, investigate your brand more, perhaps even by your products.

But isn't social media cool? Everybody has the opportunity to create content. So why pay money to a media company to contact your audience? Especially if your audience is notoriously hard to contact.
Imagine you are trying to sell slackline or rock climbing equipment. Buying an expensive thirty second slot on "Big Bang Theory" will surely catch a number of your possible buyers but there will be a lot of wasted views.

Why not build a rocking piece of content? A YouTube video that everybody wants to watch? As with this bunch of guys who clearly are interested in selling wingsuits, base rigs, BASE jump training courses, Red Bull and GoPro. This vid has had two million views and mostly it would be reaching the correct bunch of people.

Content marketing - it's a thing.
Posted by Cullen Habel at 8:57 PM No comments: