I heard a track on ABC local radio today and hunted this down. This guy is good, old school blues:

and and a blend of deep purple and 1970s Cold Chisel:


Posted by Cullen Habel at 6:02 PM No comments:

Early sign of a good manager: Taking a smaller office


Sure, in the case of new ABC Managing Director Michelle Guthrie it may be clever tokenism but nevertheless it's a good sign:

It’s been widely reported that Guthrie is moving out of her predecessor Mark Scott’s giant office on floor 14 at Sydney’s Ultimo. It is easily bigger than any space occupied by chief executives at the commercial end of the industry. That includes the giant office overlooking the Nine helipad that was once home to the Sam Chisholm, David Leckie and office squatter David Haslingden and his right-hand pooch Tido.

The very worst manager I've ever seen saw it as the first thing on her list to get the best office in the department, with similar behaviours shown by the third and fourth worst.

What’s less well known is where Guthrie will pitch up next. Guthrie is moving to level seven to be closer to the shop floor. This floor connects the two main buildings at the ABC. This means Guthrie will be more accessible to staff as well as the marketing department. The office will also be in proximity to the canteen.

I like the sound of this ex-Google senior manager. he ABC is great, but I don't think it was very well managed by Mark Scott.
Posted by Cullen Habel at 9:45 AM No comments:

Tupperware and Ikea: Selling the dream

For years I have believed that Ikea sell the dream of an organised house. So many ads say "get organised" and promise that a $29 cabinet will turn your place from a clutter box to clean smooth lines.

The same with Tupperware. Back in the day we spent hundreds of dollars for odd shaped plastic that would provide the perfect solution for times such as we made a tray of slice and needed to store it.
It's nice that at least once in the 20 years we've had this product and it served it's purpose. 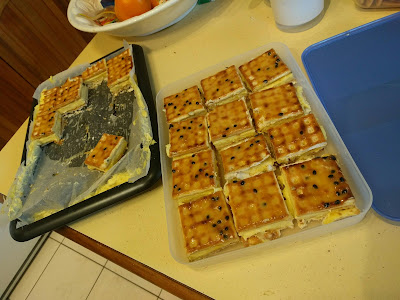 Posted by Cullen Habel at 8:02 AM No comments:

I don't like these that much as a rule. Probably too much of an influence from my father who would always say "pick up your feet" as he would hear this "Swish Swish Swish" walking through a house.

And I just thought that scuffs might be the only onomatopoeic footwear that exist.

But then there's a "jackboot" which sounds pretty much like what it is. 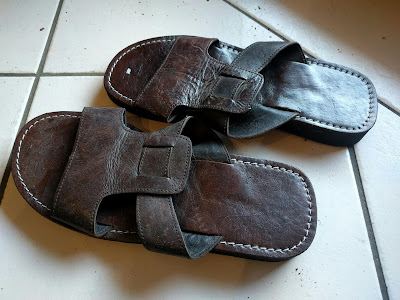 Posted by Cullen Habel at 8:02 AM No comments:

What do census cyber attackers and One Nation voters have in common?

Perhaps they were both sick of being shouted down and considered loonies.

In the leadup to the digital census night on Tuesday Aug9 there were concerns - valid I suppose - about the new ABS plan to hold onto identifying details for four years. I don't give a crap - my movement details, my personal details and pretty much anything about me is held by Google and Facebook - but I have a number of friends who do a great job of guarding their details.

Those with concerns over security were shouted down as "tin foil hats" by Christopher Pyne. About the same time we were getting told that the system was bulletproof.

I don't think Australians like being shouted down as loonies and there's a really good chance that some people decided "screw you, we'll crash your servers". I expect that the DDOS attack was not rocket science:


"This was not an attack. Nor was it a hack but rather, it was an attempt to frustrate the collection of Bureau of Statistics Census data," Mr McCormack said.

"The good news is the firewalls held up," the minister said.

Prime Minister Malcolm Turnbull's cybersecurity adviser said the tussle between ABS protections and the would-be hackers ended in "a draw".


"I would say they successfully caused frustration," Alistair MacGibbon said.

So, someone was calling a huge proportion of people loonies who shouldn't even be raising their concerns. Perhaps that segment of the population said "screw you" and made their thoughts known in a way that they could.

Brexit, Trump and the revival of One Nation
So perhaps if people are ridiculed for bringing up a point of view they will make their thoughts known in any manner they can. Perhaps if we - from our latte kingdoms - instantly default to namecalling "racist, homophobe, intolerant, human rights abuser" we are forcing the people whose views aren't ours to make themselves heard.
Take a good look at this lady. I'm sure she thanks us for sending a whole bunch of your average Australians into her waiting arms. 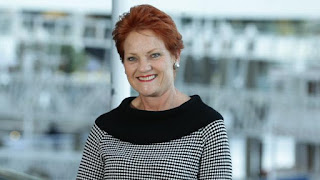 As she said about Malcolm Turnbull:

“He said: ‘You’ve got my number, ring me up any time’. I said: ‘I will, don’t worry about that’,” Ms Hanson said. “He was the man who said I would not be welcome at Parliament House. Thank you Malcolm. You got me more votes. That’s why I am there.”


Posted by Cullen Habel at 7:18 AM No comments:

Which of these images is the most offensive to you? 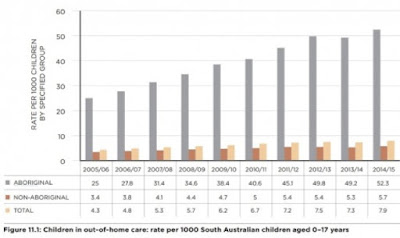 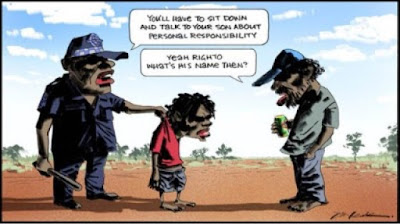 And from a NT teacher who wishes to remain anonymous:
http://www.xyz.net.au/bill-leak-nailed-it/

"Now about Bill Leak’s cartoon last week. He nailed it. He absolutely nailed it. I thought, “Wow, someone is actually telling it how it is!” And it did not just mention bad parents, but also those aborigines who want to make things better for kids, too. Many aborigines, often older women in my experience, have the same attitude as the policeman in Leak’s cartoon.
Is it racist? No. The Left say it is because it portrays aborigines in a bad light, and thus is more like a simple insult. But there is a difference between insulting a person, and telling that person a harsh truth. The former is saying something unkind simply in order to upset another person because you don’t like that person. For example, racist scribbles on toilet walls. The latter is a form of compassion – it’s not called tough ‘love’ for nothing. Bill Leak’s cartoon is surely the latter. Do you honestly think the cartoon demonstrates that Bill Leak hates aborigines? Really? It’s not in the same class as some toilet wall screed."
Posted by Cullen Habel at 7:40 PM No comments:

Thw world is round - a regret of my own

I have many regrets in the number increases every month. Generally about 5 years after whatever incident caused the harm.

While I'm not into self-flagellation I hope that a simple statement of "I regret that" is enough for me to move on and for the injured parties to say "well he is a prick but at least he knows he is".

One thing I regret - possibly my greatest regret - is the extremely hurtful letter I sent to my father back in about 1989 just before Christmas. Perhaps it takes a lifetime to recognise that we are all just dumbfucks trying to wade through life, and just because somebody's behaviour is causing you problems they are not necessarily on a mission to make your life hell. There's a very good chance that they are in a hell of their own.

Sure my core argument of "I didn't choose for my parents marriage to break up and now I'm allowed to survive it anyway I like" is something I still stand by today. But I can also accept that my dad was in a hell of his own. When a friend of his said to me at the time "he's a good man" I can see now that he was also a man under siege.

I can see all that now. The world is round; Karma is a thing.

Memories of the US

What a great trip that was. And oysters on the beach at Pismo with my best friend. 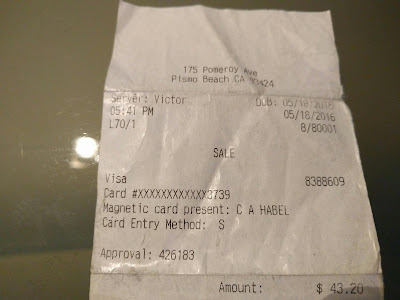 Posted by Cullen Habel at 7:33 PM No comments:

Schopenhauer: Try not to argue with a fool

This great little chapter:
https://ebooks.adelaide.edu.au/s/schopenhauer/arthur/controversy/chapter3.html
Outlines 28 ways to argue from a weak position, starting with the extension of the opponent's argument beyond its natural limit, then knocking it down. Strategem number 28 is to personally abuse your opponent. (As an aside that seems to be what the current "go to" method is when people get instantly shouted down as sceptic, homophobe, islamophobe or advocating cruelty to refugees. This default to the lowest form of argument does a disservice to the valid causes of climate science, marriage equality, tolerance and human responsibility.)
But Schopenhauer's best point here is a more eloquent version of "don't argue with an idiot - they drag you down to their level and beat you with experience":
The only safe rule, therefore, is that which Aristotle mentions in the last chapter of his Topica: not to dispute with the first person you meet, but only with those of your acquaintance of whom you know that they possess sufficient intelligence and self-respect not to advance absurdities; to appeal to reason and not to authority, and to listen to reason and yield to it; and, finally, to cherish truth, to be willing to accept reason even from an opponent, and to be just enough to bear being proved to be in the wrong, should truth lie with him. From this it follows that scarcely one man in a hundred is worth your disputing with him. You may let the remainder say what they please, for every one is at liberty to be a fool — desipere est jus gentium. Remember what Voltaire says: La paix vaut encore mieux que la vérité. Remember also an Arabian proverb which tells us that on the tree of silence there hangs its fruit, which is peace.
So if I go quiet when we're talking please don't assume you've won the argument - I probably just realised I made a mistake entering the discussion.
Posted by Cullen Habel at 9:59 AM 5 comments:

A sweet girl can stop big men in their tracks

I love this song and it reminds me of a bizarre thing that happened back in the mid 90s. I was in a car with three other men; rowdy, jokey and off to some training in the area of packaging for the fresh red meat industry. Good days.

All the banter stopped the second this song came on. Everyone just quietly listened and when the song finished, we just started talking normally. About other things. Nobody even mentioned the song - probably didn't even think of it.

I think about that with my daughter. Something about a sweet girl that can just shut up some of the loudest blokes. This is not political and I'm not telling anyone how to be. It's just something I notice about myself.

And Jewel Kilcher. What an amazing story.

Posted by Cullen Habel at 10:04 AM No comments: