Yes, life really is a game

I love the way that skydiving reminds me of the way that life is a game. Over 13 years ago when I was learning to fly camera on Tandems, on of my mentors told me that it's dangerous to get to close to a tandem around the time they deploy. But it is the way you get the best shot. "And it's all a game anyway".

And then, with the same guy ten years later we were joking about how sometimes a student will punch you in the face when they deploy their own parachute. A week later I watched exactly that happen to him. 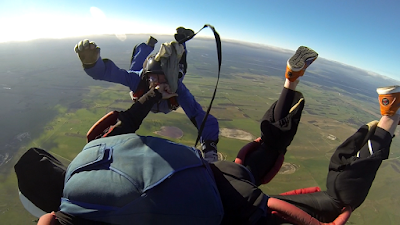 It's all just a game. And it makes the game I play in my non skydiving life seem so darn boring that it's hard to imagine why some people take it so seriously.
Posted by Cullen Habel at 10:21 PM